The Ultrasonic Fatigue Rig (UFR) measures the high-cycle-fatigue lifetime of irradiated materials, using small mm-scale specimens. A material which undergoes cyclic loading (due to mechanical or thermal stresses) will have a finite lifetime. It is important to understand how the fatigue life of materials is affected by irradiation, to ensure safe engineering design.

In UFR, thin foils (~200 microns) of materials have small mushroom-shaped cantilevers laser cut into them, before being irradiated to induce radiation damage. Inside the MRF hot cell, sample discs are punched from the foil into a shielded sample holder. This is mounted onto an ultrasonic transducer that applies an oscillation at 20 kHz. 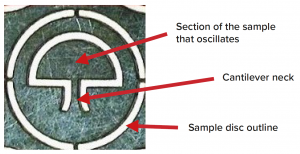 The specimen geometry is chosen such that the material attached to the cantilever neck is near resonance at this frequency. The section oscillates up and down, generating a fully reversed cyclic stress in the cantilever neck. This causes a fatigue crack to initiate and grow in the region of highest stress, until the sample eventually breaks.